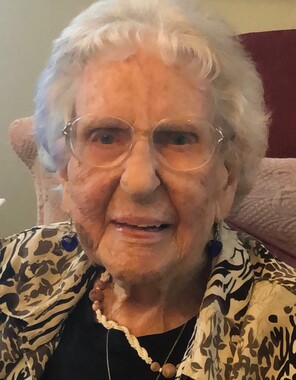 Back to Charlene's story

ONEONTA - Adored mother, grandmother, great-grandmother and lifelong book lover, Charlene Schjeldahl passed away in Oneonta, on Jan. 9, 2020, at the age of 102.
Charlene is survived by five children, Peter, Ann, Peggy, Don and Mary; five grandchildren, Mary Ann, Jessica, Ada, Anna and Caleb; and 11 great-grandchildren, Olivia, Andrew Blake, Ryleigh, Cameron, Eamon, Griffin, Oliver, Sam, Lily, Laney and Cole.
All remember "Grammy" as an enthusiastic reader and crossword puzzle solver. With a sharp sense of humor, Charlene loved to be the center of attention, whether recounting family stories or competing in Scrabble and Bridge.
An intrepid genealogist, she loved visiting her ancestral homeland of Norway and once travel was no longer an option, reading Norwegian novels and travel guides.
In June, a reporter from The Daily Star attended Charlene's 102 birthday party hosted by Hampshire House, where a local musician played Elvis Presley songs and she was presented with 102 red roses, as well as helium balloons and a strawberry cake. On that occasion, she said the secret to her longevity was her love of writing and reading. "Reading is the secret," she said. "The world is your oyster. When you read, you get to go any place you want to...What could be worse than leaving a book unfinished? Unless there's something to read in the afterlife."
Mary Charlene Hanson was born on June 27, 1917, to Charles Hanson and Lena Lium in Whapeton, North Dakota.
She graduated from University of North Dakota in 1938 with a degree in journalism. She worked as a stenographer before meeting Gilmore T. "Shelly" Schjeldahl, who would soon go on to serve with distinction in World War II. The two were married for 61 years, from 1940 until his death in 2002. She was devoted to his care both at home and at work, serving as an office manager in G.T. Schjeldahl Company, which was known for its work on Echo I (NASA's first communications satellite) and for the invention of the air sickness bag.
In 2001, when Shelly's health was failing, Shelly and Charlene moved from Minneapolis to Massachusetts to be close to their daughters, Peggy and Mary. After Shelly's passing in 2002, Charlene stayed on at Devonshire Estates in Lenox. In 2017, when independent living was no longer feasible, Charlene moved in with Ann and Bob in Oneonta, where she lived for over a year. She then moved to Oneonta's Hampshire House, where she developed close friendships and became the resident pianist. She lived there for a year and a half until a fall required round-the-clock care. She then moved back into Ann and Bob's home, where she passed away several days later in the company of her son, Peter and her dear friend, Michele.
Charlene was predeceased by her brother, Charles Edward Hanson; and cherished grandson, Jeremy Morris, who died in 2004.
Charlene's funeral is scheduled for 1 p.m. Saturday, Jan. 18, at Lester R. Grummons Funeral Home, 14 Grand St., Oneonta, with two hours of visitation beforehand.
Rather than customary condolences, the family requests that donations be made to the Jeremy Morris Scholarship Fund, College Advancement, SUNY Delhi, 454 Delhi Drive, Delhi, NY 13753.
Charlene's children acknowledge all those who lovingly cared for Grammy more than the years, particularly her granddaughter, Mary Ann; son-in-law, Bob; and everyone at Devonshire and Hampshire House.
The family is consoled in sorrow by the knowledge that Charlene's life was very long and very happy, and that she leaves behind a large family, many of whom, thanks to her, love reading, writing and Norwegian flatbread.
We will miss you, Grammy.
To view Charlene's memorial video and offer condolences to the family, visit www.grummonsfuneralhome.com.
Arrangements are by Lester R. Grummons Funeral Home in Oneonta.
Published on January 13, 2020
To send flowers to the family of Charlene Schjeldahl, please visit Tribute Store.

Send flowers
in memory of Charlene

Stewart and Katherine Hardison
We send our best wishes to Ann and her family.
Bonnie Smith
So happy that you were able to spend quality time with your mom for several years. I love her reasoning about long life is reading. What a beautiful life she had. Will be thinking of you this afternoon at her memorial service.
Sherry Loomis
I'm so sorry to hear of Charlene's passing. She has been such an inspiration to me. She was a wonderful lady.
Ruth Loomis and the Loomis family sends condolences.
Beth Olson
My mother Gudrun Tiseth Olson was a very good friend of Charlene. My mother grew up in Christine, ND. I remember Mom and I visiting Shelly and Charlene when they lived in the apt. in Edina. The last time Mom and I saw Charlene when we met with her and her daughter at the Holiday Inn in Alexandria for lunch. It was so fun !! I have really enjoyed being friends with Charlene on facebook!! Wonderful, Wonderful, Wonderful person..Sorry for your loss.
Mickey Pipkorn Petersen
Charlene and Shelly were our wonderful neighbors in Minnetonka.u Among the many kind things they did for us was taking us into their home along with our year old son just a few days after we moved in because our furnace died and it was still cold outside. Charlene was such a fantastic Christian lady and great friend to everyone priveliged to know her. She will be missed.
Sandy Schjeldahl Starr
Oh Charlene, you are often in my thoughts and memories. You were the one who was most instrumental in offering to take me in, for 2 years, during college. I remain so grateful. What an influence you and Shelly had on my life. You have done so much for me through the years. Thank you.
Diane Terry
This was a beautiful tribute to a wonderful woman. So sorry to be out of town for the service, but I send my condolences to all the family.
Love, Diane
Michael Sangiorgio
What a wonderful lady. The world was a much better place with you. You will be missed. RIP
Joanne Koch
Dear Peggy and family,
I was so sad to hear about Charlene’s passing. She was a most beautiful person, who always had a smile when I visited my mom Lil at Devonshire. She was my moms first friend there and I always enjoyed her company during my many visits. We never have enough time with our moms but you will always carry wonderful memories in your heart.
View all