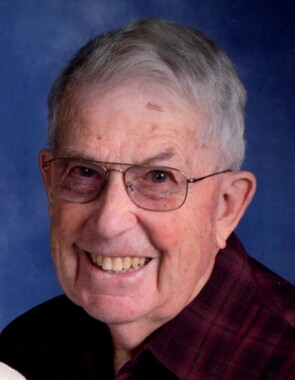 Back to Frank E.'s story

WESTVILLE - Frank E. "Skeeter" Green, a lifelong area resident and dairy farmer, passed away unexpectedly on Monday morning, Jan. 6, 2020, at his winter residence in Mesa, Arizona, with his wife, Margaret, by his side. He was 91.
He was born on Aug. 22, 1928, at Mary Imogene Bassett Hospital in Cooperstown, the son of Ambrose C. and Mildred Ottaway Green.
After graduating from Milford High School with the Class of 1945, he attended Cornell University, where he earned a two-year degree in agriculture.
On Sept. 3, 1949, Frank married Margaret Donnelly, a native of Binghamton, in a ceremony in Westville. Skeeter and Maggie settled on his family's dairy farm, "Oak Hill," where they raised their family.
For many years, he was a faithful and dedicated member of Westville United Methodist Church, where he tended to many of the church's needs, including playing the organ for Sunday worship services. He was also an active member and past master of Cherry Valley Lodge No. 334, Free and Accepted Masons, a member of the Otsego County Republican Committee, president of the board of education of Middlefield School District No. 2, Westville, served as a member on the Agricultural Stabilization and Conservation Board and served on the board of directors for Wilber National Bank (Community Bank) and was vice president of Westville Cemetery Association.
He was a man of many talents, including building a lovely home on Arnold Lake, "the camp," where they summered with their many Arnold Lake friends. He also built three cedar strip canoes and an experimental single engine airplane.
Skeeter wintered in Mesa, Arizona, with Maggie, where he was an avid pool player, volunteered on various projects for Habitat for Humanity, and for many years led the weekly hiking group.
Frank is survived by his beloved wife of 70 years, Margaret "Maggie" Green, of Westville and Mesa, Arizona; sons, Craig Green (Stephanie) of Hopkinton, New Hampshire, Kevin Green (Cindy) of Rutland, Vermont and Keith Green (Stephanie) of Omaha, Nebraska; granddaughter, Kaci Green Nason (Josh); step-grandson, Walter Teer (Jill); and four great-grandchildren, Matthew, Thomas, Damon and Karlie. He is further survived by a brother, Ward Green (Carol) of Westville; a sister, Janis G. Thorn of Manchester; and several nieces and nephews.
He was predeceased by his brother-in-law, Donald Kent Thorn; and a cherished nephew, Thomas Bobnick.
A funeral service will be offered later this spring at Westville United Methodist Church, followed by burial in Westville Cemetery.
In lieu of flowers, memorial donations may be made to Westville United Methodist Church, c/o Donna-Gene Francis, Treasurer, 1024 State Highway 166, Cooperstown, NY 13326 and Westville Cemetery Association, c/o Donna-Gene Francis, Treasurer, 1024 State Highway 166, Cooperstown, NY 13326.
Arrangements are under the care and guidance of Connell, Dow & Deysenroth Funeral Home in Cooperstown.
Published on January 13, 2020
To send flowers to the family of Frank E. Green, please visit Tribute Store.

Ryan and Jennifer brenner
So very sorry for your loss. Words can’t express how we feel. It was such a pleasure seeing him every summer at your wonderful camp. He’s so gentle and kind. You can see the love between you, that bond can never be broken. Prayers and love-
Albert Weller
God Bless and R.I.P
Linda (Weller) & Tim Steele
We are sorry to learn of Mr. Green's passing. I have many cherished memories of Frank and Ward from my childhood. Riding my pony to the water tub at the farm on Fred Ottaway Road and watching as they worked the heifers that were pastured there. In the more recent years seeing Frank mowing the field to keep the brush away. You and your family are in our thoughts & prayers. My parents Jim & Linda Weller are also saddened by his passing. He was a wonderful man and will be missed greatly!
Peg ( Bates) Osborn
My heart goes out to you and your family at this difficult time.
Tom & Lisa Pritchard
I was sorry to hear that Skeeter had passed away although it is obvious that he had a wonderful life which helped many other people. Our condolences to Maggie and the memories will be cherished.
View all