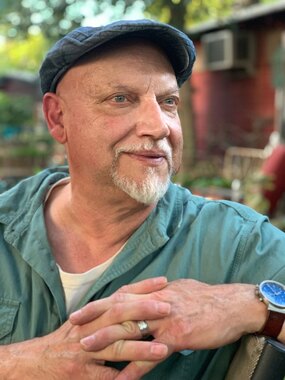 Back to Harold "Hal" Peter's story

SAN ANTONIO - San Antonio, Texas - Harold "Hal" Peter Sorensen Jr., 62, of San Antonio, Texas, passed away unexpectedly Friday, June 7, 2019, at Methodist Hospital, with his family by his side.
He was born Nov. 30, 1956, in Plainfield, New Jersey, the first of seven sons born to Harold Peter Sr. and Theresa Sorensen. His early childhood was spent in the hamlet of Stelton, New Jersey, (Edison Township) until moving to the Sorensen homestead in Morris, where he attended and graduated from Morris Central School.
Harold attended Middlesex County Community College in New Jersey where he pursued an associate degree in liberal arts, until moving to San Antonio, Texas. Harold fell in love with San Antonio, Texas, and it is there that he found his passion for painting, going on to become a master painter with a thriving business, Hal's Custom Painting.
How can one ever describe Harold Sorensen completely? He was a devoted husband, loving son, inspiring father to his son, Bjorn, loyal brother, best friend, creative musician, guitar craftsman, wild child and funny storyteller. Harold knew, admired and influenced so many people during his lifetime. He always saw the good in people, brought out the best in them and loved to write thought-provoking songs. Harold was active in the San Antonio music community and created original guitars, as well as "up-cycled" broken instruments into works of art.
Hal would make his annual pilgrimage to the family farm in Morris, where he would help on the farm, enjoy time with family and spend time with his parents, brothers, cousins and longtime friends.
Harold Peter Jr. is predeceased by his dear brother, Raymond Sorensen; as well as his grandparents.
He will be missed by his loving wife, Susan Michael Sorensen of San Antonio; his loving son, Bjorn Sorensen of Fort Worth, Texas; his parents, Harold Sr and Theresa Sorensen, of Morris; his brothers, David Sorensen (Sheryll) Greenbrook, New Jersey, Karl Sorensen, St Johnsville, Frank Sorensen, Morris, Alan Sorensen (Jane) Rock Hill and Christian Sorensen (Dale) Memphis, Tennessee; as well as his wife's family, John and Mary Joy Michael, Beth Villalpando and David and Jill Michael.
He is also survived by many nieces and nephews, who loved their Uncle Harold. Listed oldest to youngest they are, Christine Winkler (Rob), Michael Villalpando, David Sorensen Jr., Christopher Sorensen, Kevin Sorensen (Crystal), Maximie Sorensen, Justin Sorensen, Andrew Sorensen, Jaclyn Sorensen, Mykayla Sorensen, Sara Sorensen, Ashlyn Michael, Shawn Sorensen, John T. Michael, Eliza Sorensen; and his great-nieces, Gina Winkler and Kira Sorensen.
We will always carry Harold's memory in our hearts. He will be deeply missed by his family, friends and loved ones.
A family gathering will be held in Morris to celebrate Harold's life on July 6.
Published on June 23, 2019
To plant a tree in memory of Harold "Hal" Peter Sorensen Jr., please visit Tribute Store.

Plant a tree in memory
of Harold "Hal" Peter

A place to share condolences and memories.
The guestbook expires on September 21, 2019.

Restore the guestbook to view the 9 more posts by family and friends, and share a memory or message of condolence of your own.